I’ll dispense with my normal summary information… SHGU 200 was my first DNF.  I made a bad decision two hours into the race and ripped my rear derailleur off my bike, and without a spare hanger, I was unable to continue.

SHGU was my second “A” race of the season, a few months after American Triple T.  Training went well, and I transitioned from triathlon training to purely cycling, and put in some long weeks as part of my preparation. 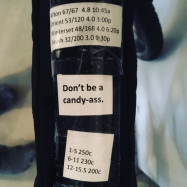 My race plan on my top tube.  Should have said, “don’t be a dumb-ass”.

As part of training, I had helped Sarah Cooper (race director) scout out the course over a series of rides, covering all of the 200+ miles of the planned course.  Overall, I felt well prepared for the race.

Although the course is challenging, the big factor for 2017 was the weather.  It rained heavily the two days prior to the race, and rain was predicted for much of the race day as well.  Sarah made several changes to the course prior to the start (and some after the start), to ensure that the course was finishable (yes, not actually a word… but you know what I mean).

With 200 miles of riding ahead, I started the race a bit more conservative than last year.  I wanted to hang in the top 10 riders, but didn’t want to toast my legs or wipe out being too aggressive.   During my time racing, I was on track for nutrition (250 cals/hr) and just a bit shy of my targeted power levels.  I felt great, but was more limited by the grip I was getting on the roads than any physical issue.  I was riding  around Joe Mann and Mickey Boianoff, and was right where I wanted to be.

I was just a bit ahead of the Joe and Mickey as we headed into the first really muddy road.  It wasn’t even actually a B road, but it was muddy enough to seem like one.  I could see bike tracks on the road itself, so I headed right into the road without worrying too much about it.  My tires quickly got covered with sticky mud, to the point where they would barely turn.  I got off my bike and got my plastic knife out and started cleaning the mud off my tires and out of my frame.  I looked back and Joe was carrying his bike and then pushing it in the grass on the side of the road.  Shortly after Mickey passed me pushing his bike as well. 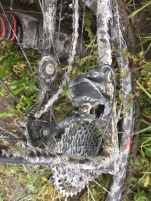 My bike doesn’t seem to be shifting correctly…

Once I got my bike cleaned off I looked ahead, and thought I saw Mickey back on his bike near the side of the road.  I pushed a bit, and then thought the road looked a bit drier.  I got back on my bike and started to ride.  It was fine for a bit, and then I was back in the sticky mud.  This time I heard a clunk, and looked down to see my rear derailleur wrapped in my spokes. 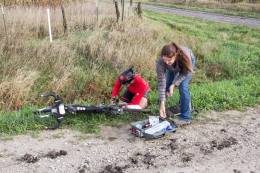 You can see all the mud clumps as people were cleaning off their bikes near me, as I worked on bike.  Photo by Steve Fuller.

I cleaned my bike up, pushed it to the end of the road, and tried to convert it to a single speed.  I found that with my asymmetrical frame design, the right side chainstay is too low to allow the use of the small chainring without rubbing the frame (without something pushing the chain lower, such as a derailleur).  Sarah and Steve came over with some tools and I tried to put my chain on the big chainring, and a larger cog in the rear… which was an exercise in futility.   It quickly became apparent that unless the chainline is perfectly straight, it will never stay on the rear cog without something like a derailleur holding it in place.  Since riding 50/11 wasn’t practical on this course, I called it quits, about 30 miles into the race.

A crappy weather day turned into a nice evening.

Certainly it was disappointing to DNF.  But I’ve never found lamenting to be productive, so I went back and cleaned up and told Sarah I’d help with the race by being a volunteer.  I spent some time at CP2 taking pictures, and then spent time by one of the detours, helping to ensure riders stayed on track.  Later there were some unclear areas on the cue sheets, so I spent time north of Winterset making sure people were taking the correct route, and periodically checking on the remaining 200 mile racers.  It was actually sort of peaceful out there… just me, the stars and the coyotes howling.  After the last rider went by, I went to the finish line for a while to see Joe Mann come in, and then called it a day sometime after 11:00 pm that night.

So… what did I learn?  Although I had heard of people ripping their derailleurs off, I’d never seen it myself.  Mostly I’ve heard about it happening in the grass, but clearly it happens in mud as well.  I did have a spare derailleur hanger at home, but it should have been in my bag.  I’m not certain that it would have allowed me to continue, but at least I’d have had the option of trying.  I found later that my derailleur was pretty bent, and one of the pulleys had become damaged as well. But maybe it would have been good enough for single speed mode… who knows?  The other takeaway was to move to Connex connectors for my chain.  The standard missing link connectors are too difficult to get off without a specific tool.  I have a Connex connector on my Tri bike, but now put them on my gravel bike as well.

All packaged up with my converter, spare hanger, and spare Connex.

How to be better prepared for my next adventure?  I ordered another spare derailleur hanger for my bike bag, as well as a single speed converter kit. I tested it out as I was repairing my bike, and found that it would work fine to allow me to run my bike in the small chainring, as well as create some ability to set it up in a gear that wasn’t perfectly aligned (although I don’t think I’d go to extreme differences).  My hope is this setup would allow me to get home on a training ride, or even continue on as a single speed (if it made sense) in a race.  Belts and suspenders… live and learn.  🙂